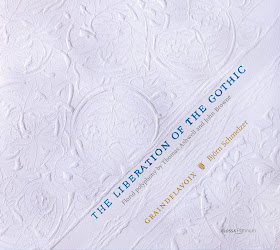 The Liberation of the Gothic: Florid polyphony by Thomas Ashwell and John Browne

Bjorn Schmelzer brings his speculative musical-historical approach to English music of the late 15th and early 16th century, once again combined with the highest levels of both music and recording technology, and the result is stunning. The fine singers of the Belgian choir Graindelavoix completely won me over to this music, even though I had been immersed in the less ornate but still moving (and more or less contemporary) music from the Peterhouse Partbooks, as sung by Scott Metcalfe's Blue Heron.

One of Schmelzer's starting points is this short video by Paul Binski, Professor of the History of Medieval Art at Cambridge University, who discusses the amazing art and architecture, sadly defaced by iconoclasts during the Reformation, of Ely Cathedral's Lady Chapel.

Schmelzer finds in the splendour of the Lady Chapel and its impetus in Marian theology a parallel to the music of John Browne, who was born in 1480 but lived only until 1525; and Thomas Ashwell, who may have been nearly an exact contemporary, though it's possible he died as early as 1513. The "florid polyphony" of Browne and Ashwell has the same ebullient drive as the double-curved ogee arches of the Lady Chapel, and Schmelzer underlines this exuberance through his animated interpretation, which his expert choir handles with aplomb. This is what Pater meant when he said in The School of Giorgione (1873) that "All art constantly aspires towards the condition of music."

Still, there's another level beyond the florid decorations, and John Ruskin touches on it in The Stones of Venice:


There are however, far nobler interests mingling, in the Gothic heart, with the rude love of decorative accumulation: a magnificent enthusiasm, which feels as if it never could do enough to reach the fulness of its ideal ; an unselfishness of sacrifice, which would rather cast fruitless labour before the altar than stand idle in the market; and, finally, a profound sympathy with the fulness and wealth of the material universe, rising out of that Naturalism whose operation we have already endeavoured to define.

In the end it is the spiritual nature of both Ely Cathedral and the music of Browne and Ashwell, a deep connection to the cult of Mary. Ruskin's "magnificent enthusiasm" is evident in this marvellous disc.
Dean Frey at 8:42 PM
Share