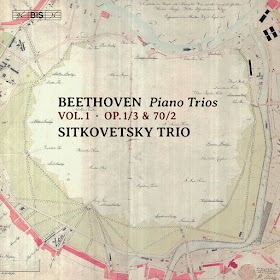 The three piano trios that Beethoven published as opus 1, and especially the third in C minor, constituted an announcement to the wide world that a new composer was about to enter into the top echelon in Vienna, the musical centre of Europe at the time. It's astounding that this obscure young man from Bonn, without connections, should be interacting with Joseph Haydn, the world's most famous composer, and having his new music premiered two years later at the home of Prince Lichnowsky. I'm not sure which disparity was more pronounced: the social distance between this impoverished newcomer and the one-percent Viennese aristocracy, or the professional gap between a freelancer with barely any gigs on his resumé and Europe's top musical superstar at the peak of his powers. Perhaps this social mobility came about because of the recent revolutionary events in France, though I'm sure at least as much was due to Beethoven's outsize talent and his pure strength of will - chutzpah in a word.

I'm impressed with the way the London-based Sitkovetsky Trio give us some idea of just how new the C minor trio might have sounded to those who heard it for the first time at Prince Lichnowsky's musical gathering, without leaning in too hard towards the revolutionary, after the fact as it were. I've heard some groups anachronistically make too much of a meal of this work. While Haydn and Mozart had recently overhauled the piano trio, freeing it from its salon music roots, this was still within a rather narrow, civilized band. If one considers this relatively sedate landscape, then Beethoven's dramatic effects and new harmonic and rhythmic devices can sound a bit disconcerting, even considering the two centuries of musical innovation to come.


The Sitkovetsky Trio usher us into a completely different soundscape with their performance of the second Piano Trio of Beethoven's op. 70 set, from 1809, the period of the Second Symphony. Gone is the chip on his shoulder. We know that life was no easier for the composer, in spite of some significant successes, but the quiet confidence and grace of the first movement is perhaps a sign of maturity.  Haydn died on May 31st of that year; perhaps this work, in a genre that Franz Joseph had truly made his own, is a tribute to Beethoven's true musical father.

Tucked away between these two works is a little gem that Beethoven wrote in 1812, the Allegretto, WoO. 39. This may be a simple piece, designed for the ten-year-old Maximiliane Brentano, the daughter of a friend of Beethoven's, but the degree of difficulty to bring about such a perfect result is very, very high. Here again is evidence of the sensitivity and musicality of the Sitkovetsky Trio. This entire program is remarkable, and bodes well for future volumes.